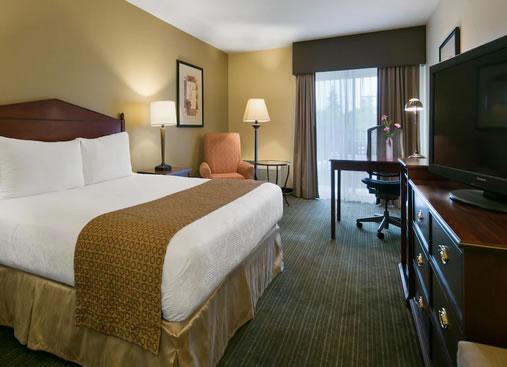 Best Western Plaza by the Green in Kent, Washington, had everything: views overlooking a golf course, proximity to nature walks and bicycle trails along the river, conference rooms, and rooms they couldn’t sell. Out of 97 total rooms, 10 were smoking that consistently never rented. When non-smoking rooms filled up, the hotel lost money from additional guests because non-smokers won’t stay in a smoking room. The rooms smell so bad “even smokers don’t want to stay in a smoking room!” says Kathy Madison, general manager of the Best Western.

Recognizing the lost revenue of empty rooms, Madison wanted to convert two of them to non-smoking. She chose two rooms that guests had smoked in for 14 years. However, converting them seemed impossible. Cigarette smoke permeates a room, getting onto and into walls, ceilings, drapes, carpets, and furniture. After 14 years, the smell of stale cigarette smoke saturated these rooms. The hotel had used ozone machines, foggers, and other products that helped some but weren’t permanent solutions. Madison knew cleaning alone couldn’t remove the odor, no matter how thorough.

New carpets, furniture, drapes, and paint, might have fixed the problem, but replacing everything wasn’t financially feasible. After spending capital on room upgrades, Madison would have to wait months to recover those costs. Air fresheners would only hide the smell and never get rid of it. Plus, the chemicals in air fresheners could be dangerous for guests and staff with respiratory problems or asthma.

Madison had heard about the odor eliminator PureAyre1 and its effectiveness in getting rid of cigarette smoke odors. She knew it was an all-natural product, meaning it wouldn’t leave behind any chemical or fragrance residue that might make staff or guests ill. Using PureAyre was also less expensive than tearing everything out and redoing the room. So she contacted Clean Earth, Inc., the maker of PureAyre, to find out if the company could help her convert the rooms.

Deodorizing the two hotel rooms was an easy process for Clean Earth. The team first fogged the room to deodorize the walls, ceilings, and furniture. Then they cleaned the carpets with a fragrance-free shampoo mixed with PureAyre to get rid of the odor, tar buildup, smoke particles, and oils. All that took under two hours. The curtains needed to go to the cleaners to get rid of the yellow smoke residue, but no cleaner would guarantee getting the odor out. So the curtains were wet cleaned with detergent and PureAyre, and the cigarette smoke odor was removed entirely.

Ironically, eliminating one odor meant finding another. When Clean Earth first entered the rooms, one definitely smelled worse than the other. The team assumed the cigarette smoke damage was simply more extreme in the smellier room. After eliminating the cigarette smoke odors, they identified the second smell as mildew, found the source, and powered other odors. With the mildew source identified, the hotel tackled and resolved it.

Because of the low cost of deodorizing the room, Best Western could recoup their costs within a week. Compare that to the cost of repainting, recarpeting, and refurnishing the rooms to recover them as non-smoking rooms. Or—worse yet—the revenue lost when guests check-in elsewhere!

Madison couldn’t be happier with the results. “I wanted to convert those rooms to non-smoking but doubted I really could. Clean Earth did an amazing job using PureAyre to get rid of every last cigarette smoke odor. My investment was minimal compared to the return on having two more rooms!”

1 PureAyre is safe because it’s made only of natural ingredients: food-grade enzymes, water, and essential oils. It’s strong because the enzymes break down the chemical bonds of odor-causing compounds to permanently get rid of smells.

To learn more about using PureAyre to convert smoking rooms and for answers to your technical questions, call Rico at 253-332-7420.